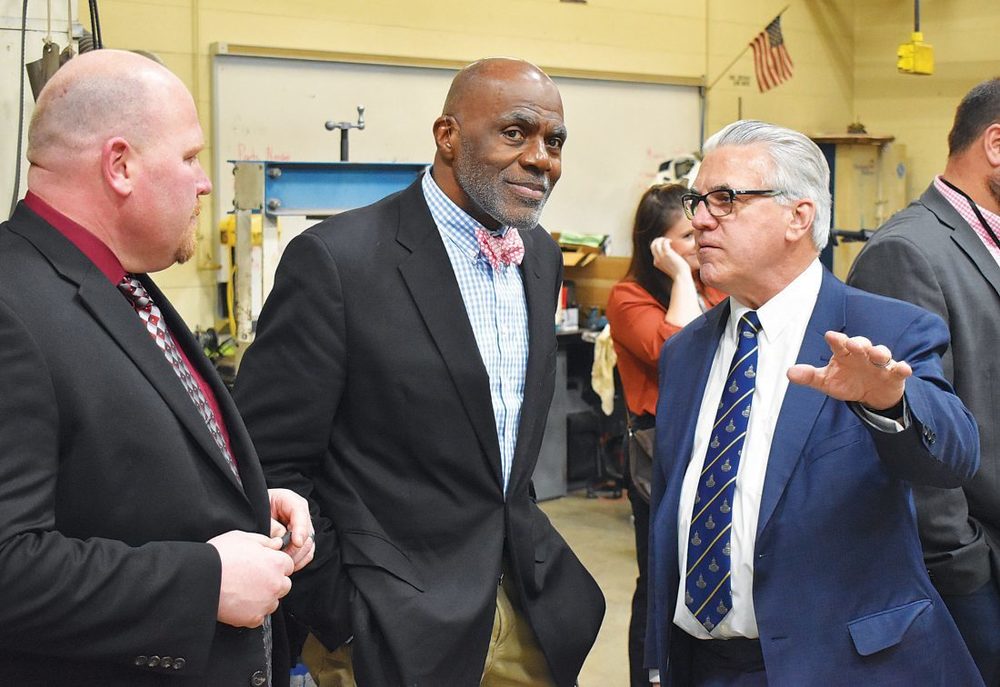 Story courtesy of the Sentinel. To read this story and more check out the Fairmont Sentinel's website here.

FAIRMONT — Minnesota is failing when it comes to educating all of its children.

Research from the Minneapolis Federal Reserve states: Low-income white children, children of color and American Indian children across all of Minnesota have far worse educational outcomes than children from higher-income families.

The news is not new. It has been a long-standing problem.

Minneapolis Federal Reserve chief Neel Kashkari and former Minnesota Supreme Court Justice Alan Page visited Fairmont High School on Thursday to point a finger of blame at the state’s political system and offer their solution. It is a proposed state constitutional amendment they believe will create the pressure to make state lawmakers, the governor and the courts ensure that every child receives a quality education.

The duo’s proposed amendment reads: “All children have a fundamental right to a quality public education that fully prepares them with the skills necessary for participation in the economy, our democracy, and society, as measured against uniform achievement standards set forth by the state. It is a paramount duty of the state to ensure quality public schools that fulfill this fundamental right.”

While the state is currently required by its constitution to provide a system of public schools, there is no phrase or clause devoted to quality.

“There have been many [state policy] attempts to lift everybody up, but those attempts have largely failed,” Kashkari noted.

So about a year ago, he reached out to Page, who has been an education advocate in Minnesota for decades. Page says his parents instilled in him a deep respect for education. He subsequently had the opportunity to visit many children in many schools and promote education when he played for the Minnesota Vikings, as well as later in life.

“Education is a tool that anyone can use to achieve their hopes and dreams,” Page said. But he said the educational disparities linked to race and socioeconomics are hurting children and their futures.

Page and Kashkari support a constitutional amendment because it carries permanence, while lawmakers come and go, and political parties shift in and out of power. As things stand now, policies can switch every two or four years.

“That process has let the children of Minnesota down,” Kashkari said. “What’s been lost is we haven’t made big changes that could really make sure all children in Minnesota succeed.”

Notably, the duo are not saying what those changes should be. Rather, they say their amendment will force the state to act, with the entire basket of possible educational solutions available to it and to local schools. The emphasis, Page says, is the “fundamental right to a quality public education.” He says it puts children first.

Fairmont students had the opportunity to put questions to the pair, and they did not lob softballs. They pressed Kashkari and Page on what they mean by “quality” education, how long it will take to enact meaningful reforms, what funding might be needed, what changes can be expected, how to enforce their amendment and whether the amendment can address larger societal problems, such as the breakdown of the family.

Kashkari made the case that Minnesota is not going first in its attempt to improve education for all its children. Other states, he notes, have approved changes that subsequently forced their legislatures to act, and meaningful reforms occurred within a couple of years. He said he and Page are not proposing a one-size-fits-all solution, instead arguing that education is best delivered at the local level.

Page said the amendment will be enforceable, which means families can sue in court if they believe their children are not receiving a quality education. He described this as a “strong incentive” for the state to perform.

Kashkari acknowledged that the amendment does not attempt to address larger societal problems.

To put their amendment in front of voters this fall, Page and Kashkari need approval from the Legislature, which is in session through May.